The plight of the crew aboard the arrested vessel, the Agatis, has made headlines this week.

The vessel was arrested on March 17, en route from Mianmar to the Ivory Coast, and has been stranded at Three Anchor Bay in Cape Town ever since.  Conditions have deteriorated quickly for the 21 crew members aboard.  According to one crew member, Otto Lasrado, there is no clean drinking water left; no water to wash clothes or flush toilets; two months worth of waste is piling up and there is very little food left.

According to the crew’s lawyer, Alan Goldberg, conditions aboard are not good and the only chance the crew have of getting home to India is to pay for a ship to remove them from the Agatis and arrange for their own fare back to India.  As they have received no pay for several months, this is simply out of the question.

The owner of the vessel, Meranti Bahari PT, is in the midst of a severe financial crisis and the ships agent, Aquarius Maritime PTE Limited, from Singapore, and a supplier from United Arab Emirates arranged for the arrest in South African waters in an attempt to recoup their money. To make matters worse the ship is not allowed to enter Cape Town harbour as there is no security that the relevant fees will be paid.

The predicament of this crew also impacts on their families back home who rely on their income.  “We chose this line of work so that we could take care of our families and of our children.  Who is going to look after them now?” said Lasrado.

Within the maritime industry there is a continual attempt to throw the spotlight on our seafarers, their contribution to our economy and how hard they work in often less than ideal conditions.  Here is a group of men who have been let down by the very company that they work for and are now stranded far from home, friends and family, with no pay and no way of getting back home.  Where does the responsibility lie to help this crew and others in similar situations worldwide?

Over the last few weeks the Bring Back Our Girls (#bringbackourgirls) campaign has ignited quite a following across the globe. Initially fueled by many people’s outrage that the media had all but ignored the story, this grew to a lambasting of international super-powers for not stepping in to assist Nigeria find the girls. Mostly the argument followed the rather simplistic course that, if this had happened to 200 white schoolgirls the media would have been all over it and that if it was a situation that jeopardised America’s access to oil then they would have sent in the troops.

This is not the place to debate either of these suppositions and certainly the plight of these girls is one of grave concern. Indeed the message to Bring Back Our Girls has gone viral and everyone is standing up in support of it: from the ANC Women’s league to individuals keen to pen, blog and tweet about it to get in on the action. Even corporates are parading employees in front of cameras and posting photos of them holding up signs with the Bring Back Our Girls message on them – some of them in the maritime industry.

So damn it – where is the #BringBackOurSeafarers campaign? Why is every shipping company, support company, port company, importer, exporter and seafarer not jumping up and down for more media coverage about the plight of 54 seafarers who are still being held hostage in deplorable conditions. According to the recently released document on the State of Maritime Piracy by Oceans Beyond Piracy these seafarers have been held in captivity for almost three years.

“Substantial work must still be done in the interest of saving the lives of the 54 high risk hostages who remain in pirate captivity almost three years after their capture. Moreover, the continued ability of pirates to hijack small vessels such as dhows and fishing vessels is a continued risk. It is important to remember that piracy is not only a threat to the free flow of goods, but also to the well-being of individual seafarers, regardless of their vessel size or nationality. It is evident that the number of hostages in captivity, while trending downward, remains of immediate relevance to counter-piracy work and should be prioritized by the maritime and international communities,” the report says.

While I am personally doubtful of the true effectiveness of viral campaigns such as the one directed at releasing the Nigerian schoolgirls and feel they simply help us feel better about being powerless in the face of such atrocities; what if they are even slightly successful in seeing their safe return as a global eye is turned to the situation?

What if viral campaigns do prompt the appropriate action? Then the maritime industry needs to be more active in pushing the agenda. Yes we have had successful intervention at sea in the form of naval presence, armed guards and vessel hardening – but 54 seafarers are still no closer to going home. So as you spare a thought for the schoolgirls and their families – spare a thought for those seafarers and their families and consider some action. #BringBackOurSeafarers. 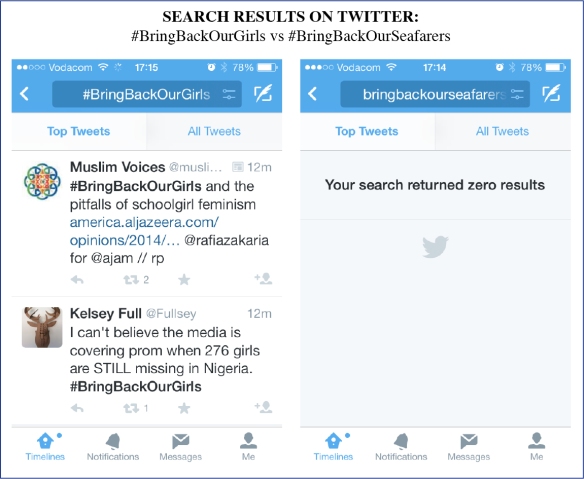