Today we celebrated International Maritime Day in South Africa. It’s a great way to elevate maritime matters and showcase the potential that the various industry sectors have to offer the South African economy and employment landscape. It’s a wonderful opportunity for industry and government to come together to prove that each is serious about realising the opportunities that still exist.

So it is somewhat disappointing to sit in the airport after leaving the festivities in Richards Bay feeling a little deflated. Yesterday’s Maritime Skills Summit was a wonderful introduction to herald in this day, but today’s parade of speeches from the Department of Transport and other invited as well as uninvited speakers (with the exception of the always eloquent Tsietsi Mokhele) simply did not give the industry the attention it deserves.

And so, as I reflect on the call from some in the industry to move towards the establishment of a dedicated Ministry of Maritime Affairs, I must admit I may well get behind this call. That the Department of Transport chose to launch October as Transport month at this function is still understandable, but to allow almost the entire proceedings of International MARITIME day to be dominated by road safety issues, speed limit debates and even the seemingly impromptu advertorial for Santaco Airlines is quite unforgivable.

In retrospect I should not be surprised. At last night’s Maritime Skills Summit dinner the Department of Transport’s banner on the stage boldly advertised the Arrive Alive (road safety) campaign – and not one of their roll-up banners in the hall of the venue today related to anything vaguely maritime until the one lone banner was revealed as the Minister launched Transport Month.

Even on this banner our industry was rather side-lined as the “maritime” picture amongst the other transport-related imagery depicted a stack of containers that may well have been taken at Gauteng’s “inland port”.

Sigh – but one has to give the South African Maritime Safety Authority (SAMSA) their due. They are almost a lone drummer in the wilderness that is government and are beating a passionate rhythm for our industry.

And so surely; if we can separate Higher Education into a separate ministry that can work towards progressing the much needed change in this sphere – surely we can move maritime matters from all the disparate departments that regard them only as periphery issues into a Maritime Department that can truly advance the vision that Commander Tsietsi Mokhele is so passionately advocating.

P.S. Industry needs to show up and be counted on such days as well. 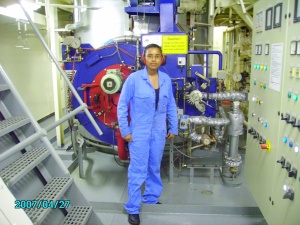 Kelly Klaasen is currently a Fourth Engineer on Safmarine vessels and last year's winner of the SAMSA Seafarer of the Year Award. (Photo courtesy of Safmarine)

Yesterday we filmed an interview with the winner of last year’s SAMSA Seafarer of the Year Award and it was clear to see why our judging panel chose this petite and passionate youngster.

Kelly Klaasen in no ordinary seafarer. She’s the type of mariner that can inspire more of our young South Africans to sign up for a life at sea. While she understands the challenges; the commitment and the hard work required to move up the ranks at sea – she is also clear about the benefits and opportunities that her career choice has provided.

Getting ready to fly out to meet her next ship, Kelly will be at sea until about January next year. Yes, she will miss Christmas with her family, but she is ticking off places on the world map that she has visited (all expenses paid). She is also working her way up to Second Engineer and knows that one day when she comes ashore there will be plenty of job opportunities for her.

Chatting to her yesterday it was clear that this well-spoken and determined product of the Lawhill Maritime Centre at Simons Town High School is ready to do what it takes to make a success of her life and to promote the opportunities that the maritime industry holds.

Having set aside the monetary prize (R20 000) that goes with the award for future studies there is no doubt that, when the current top brass of the maritime industry are watching from the sidelines, she will be holding her own amongst a new generation of maritime executives.

The SAMSA Seafarer of the Year Award aims to identify and recognise excellence at sea. This year’s function will be held at the Cape Town International Convention Centre on 22 October and nominations close on 01 October.

If your business employs seafarers of any kind who have excelled over the last year, what are you waiting for? Take 20 minutes out of your day today and make sure that they get the recognition that they deserve. You can download the nomination form from our website (www.maritimesa.co.za) or simply fill in the criteria online.