I am not going to comment on the State of the Nation Address (SONA) made last week by President Jacob Zuma except to say I did hear him mention the maritime industry as he acknowledged the importance of the fishing industry; the need to develop our ports and the focus on oil and gas for the development of Cape Town and Saldanha Bay. I am, however, going to comment on a speech made the night before SONA by Commander Tsietsi Mokhele, CEO of the South African Maritime Safety Authority (SAMSA).

Anyone who has ever listened to the CEO speak will know that he is constantly pushing the South African maritime agenda – and it seems that, while there is still much to be done, a lot of groundwork has been covered. 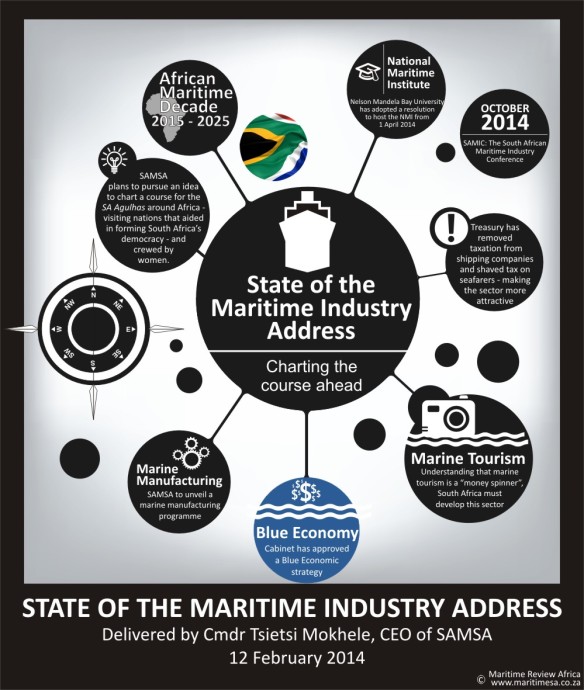 Here are a few highlights of his speech:

TREASURY TICKS OFF TAXATION: Mokhele highlighted the decision by South African Treasury last year to remove all forms of taxation on shipping. “I never thought in my living days that I would see South Africa Treasury moving on shipping tax when we have waited and worked so hard on the tonnage tax,” he said adding that although the industry was willing to accept a nominal tax, this gesture to help develop the industry was welcomed. Treasury has shaved tax contributions of seafarers; removed taxation on the sale of assets; and paved the way for shipping companies to trade in any international currency.

“I never thought in my living days that I would see South Africa Treasury moving on shipping tax when we have waited and worked so hard on the tonnage tax.”

THE BLUE ECONOMIC STRATEGY: In a similarly positive light, Mokhele reported that Cabinet had approved The Blue Economic Strategy for the country. “It talks to helping improve the lives of our people by taking and leveraging the assets of the industry; the expertise that is there. It is a strategy about development; it is a strategy about progress – and about giving the economy an upliftment,” he said.

THE AFRICAN MARITIME DECADE: Coupled to the approval of the African Integrated Maritime Strategy (AIMS) 2050 made by the African Union Commission at the end of January was the announcement that 2015 to 2025 would be dedicated to the maritime industry.

“It means that the maritime sector has arrived where it needed to be. It has become an asset of of our people, politically endorsed, industry recognised opportunities and communities are involved,” said Mokhele.

NATIONAL MARITIME INSTITUTE: Having completed a feasibility study to assess the impact of establishing a National Maritime Institute, SAMSA has successfully concluded a deal with the Nelson Mandela Metropolitan University. On November 12 last year, the University passed a resolution to accept the custodianship of the National Maritime Institute. According to Mokhele, the Institute will be operational from April 1 this year and will coordinate efforts in maritime education. “We are not displacing the existing infrastructure, but providing cohesion in the development of programmes that are geared to the development of technology and innovation,” he said.

MARINE TOURISM STRATEGY: Understanding that 80 percent of the United States of America’s tourism revenue originates from marine tourism, Mokhele’s announcement that SAMSA would unveil a Maritime Tourism Strategy during the course of the year, makes sense as a strategy to open the maritime sector to new entrants.

“Water programmes sell. They sell real estate, they sell activities, they sell everything – and therefore our marine strategy is going to be inclusive of the tourism strategy that we are going to unveil before the end of this year.”

MARINE MANUFACTURING STRATEGY: Another strategy scheduled to be unveiled during the course of the year is one that speaks to the marine manufacturing sector. Mokhele spoke about the need to develop the capabilities of the ship repair and ultimately the shipbuilding sectors.  Alluding to the potential of gearing up for the offshore oil and gas industry, Mokhele said “South Africa has to gear themselves up to become the hub service centre for the gas industry that is emerging on the east, but also to play a part on the existing oil and gas industry that is already established on the west of the continent.”

CELEBRATING SOUTH AFRICA’S 20 YEARS OF DEMOCRACY: Perhaps the most ambitious plans that Mokhele revealed were those relating to a planned cruise around the African continent. He aims to see an all-female crew navigate the SA Agulhas to visit nations in Africa that supported the liberation of South Africa. The cruise aims to also set up a fund for the development of women in Africa’s maritime sectors. SAMSA will approach industry to help sponsor this initiative.

SAMIC IS BACK ON THE CALENDAR: If you remember the landmark conference initiated by SAMSA in 2012, you may be pleased to hear that it is scheduled to return to the calendar in October this year. It will be a good opportunity to report back on resolutions taken at the last edition and decide whether the industry, government and other stakeholders have stepped up to the plate to see real development of the industry.

While these topics remain the highlights of Tsietsi Mokhele’s speech, he also spoke of the success of the cadetship programme; the ambitions to see ships return to the ships registry as well as the interest from various shipping companies to source South African seafarers to crew their fleets.

Yes, he told a good story, but we still all need to roll up our sleeves and get back to work. It makes no sense to endlessly debate the merits of a report back if we are not prepared to go back to our desks – irrespective of our views – and make things happen.