I was in Durban last week so I took the opportunity to visit Sheffield Beach and see the casualty on the rocks. What a sight! It makes a beautiful exhibit for those wanting to see what a ship looks like above and below the water line. And it is still attracting attention as well as visitors to the beach. 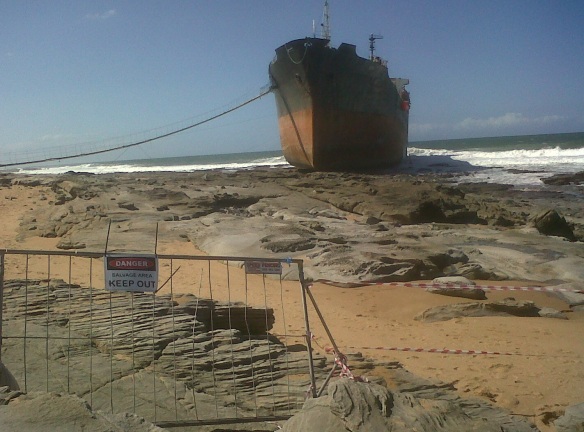 On the rocks at Sheffield Beach in Durban, South Africa.

The residents may not be all that stoked, but the car guards are beaming from ear to ear at the traffic turnaround in the area.

The vessel also drew the attention of the producers of Carte Blanche recently, but I must admit to being somewhat disappointed at their coverage of the incident. Apart from some deliberate editing that had a SAMSA official stating that there was no pollution from the vessel while they showed footage of small oil slick at the site – there really was nothing clever about their broadcast.

In fact, it made me reflect on some of the maritime-related press conferences that I have been to where the reporters from the daily newspapers arrive with the story already written in their heads and wait for any small quote that relates to this angle. It’s a technique that oftentimes ensures that they miss the actual story as it impacts on the maritime industry – and has me sighing when I read the story in the paper the next day.

Anyway – back to Sheffield Beach.

According to sources the plan is to try to refloat the vessel at the end of the month at high tide. Some say that this is an ambitious plan and point to the two options:

It’s obvious which option would be the preferred one considering the benefits of selling the vessel as is for its scrap value. Cutting the vessel will be expensive and, given the inaccessibility of the beach, a difficult undertaking.

But there’s another question that’s been haunting me. Comparing this incident to that of the Seli 1, it is interesting that the government seems at ease with footing the salvage bill in Durban, but not in Cape Town.

Some suggest that the vessel on Sheffield beach poses more of a risk to the public, but I point to recent SAMSA directives warning ocean-users to stay clear of the Seli 1 and even some emails from residents in the area reporting coal washing up on the Blouberg beach just two weeks ago.

Well – we’ll be covering the salvage and towage sector in the next issue of Maritime Review Southern Africa so if you would like to provide some input on these two incidents, please do not hesitate to get in touch.